From “The Painter of Modern Life,”
1863
By Charles Baudelaire
Translation by P.E. Charvet.

The wealthy man, who, blase though he may be, has no occupation in life but to chase along the highway of happiness, the man nurtured in luxury, and habituated from early youth to being obeyed by others, the man, finally, who has no profession other than elegance, is bound at all times to have a facial expression of a very special kind. Dandyism is an ill-defined social attitude as strange as dueling; it goes back a long way, since Caesar, Catilina, Alcibiades provide us with brilliant examples of it; it is very widespread, since Chateaubriand found examples of it in the forests and on the lake-sides of the New World. Dandyism, which is an institution outside the law, has a rigorous code of laws that all its subjects are strictly bound by, however ardent and independent their individual characters may be.

The English novelists, more than others, have cultivated the ‘high life’ type of novel, and their French counterparts who, like M. de Custine, have tried to specialize in love novels have very wisely taken care to endow their characters with purses long enough for them to indulge without hesitation their slightest whims; and they freed them from any profession. These beings have no other status but that of cultivating the idea of beauty in their own persons, of satisfying their passions, of feeling and thinking. Thus they possess, to their hearts’ content, and to a vast degree, both time and money, without which fantasy, reduced to the state of ephemeral reverie, can scarcely be translated into action. It is unfortunately very true that, without leisure and money, love can be no more than an orgy of the common man, or the accomplishment of a conjugal duty. Instead of being a sudden impulse full of ardor and reverie, it becomes a distastefully utilitarian affair.

If I speak of love in the context of dandyism, the reason is that love is the natural occupation of men of leisure. But the dandy does not consider love as a special aim in life. If I have mentioned money, the reason is that money is indispensable to those who make an exclusive cult of their passions, but the dandy does not aspire to wealth as an object in itself; an open bank credit could suit him just as well; he leaves that squalid passion to vulgar mortals. Contrary to what a lot of thoughtless people seem to believe, dandyism is not even an excessive delight in clothes and material elegance. For the perfect dandy, these things are no more than the symbol of the aristocratic superiority of his mind. Thus, in his eyes, enamored as he is above all of distinction, perfection in dress consists in absolute simplicity, which is, indeed, the best way of being distinguished. What then can this passion be, which has crystallized into a doctrine, and has formed a number of outstanding devotees, this unwritten code that has molded so proud a brotherhood? It is, above all, the burning desire to create a personal form of originality, within the external limits of social conventions. It is a kind of cult of the ego which can still survive the pursuit of that form of happiness to be found in others, in woman for example; which can even survive what are called illusions. It is the pleasure of causing surprise in others, and the proud satisfaction of never showing any oneself. A dandy may be blase, he may even suffer pain, but in the latter case he will keep smiling, like the Spartan under the bite of the fox.

Clearly, then, dandyism in certain respects comes close to spirituality and to stoicism, but a dandy can never be a vulgar man. If he were to commit a crime, he might perhaps be socially damned, but if the crime came from some trivial cause, the disgrace would be irreparable. Let the reader not be shocked by this mixture of the grave and the gay; let him rather reflect that there is a sort of grandeur in all follies, a driving power in every sort of excess. A strange form of spirituality indeed! For those who are its high priests and its victims at one and the same time, all the complicated material conditions they subject themselves to, from the most flawless dress at any time of day or night to the most risky sporting feats, are no more than a series of gymnastic exercises suitable to strengthen the will and school the soul. Indeed I was not far wrong when I compared dandyism to a kind of religion. The most rigorous monastic rule, the inexorable commands of the Old Man of the Mountain, who enjoined suicide on his intoxicated disciples, were not more despotic or more slavishly obeyed than this doctrine of elegance and originality, which, like the others, imposes upon its ambitious and humble sectaries, men as often as not full of spirit, passion, courage, controlled energy, the terrible precept: Perinde ac cadaver!

Fastidious, unbelievables, beaux, lions or dandies: whichever label these men claim for themselves, one and all stem from the same origin, all share the same characteristic of opposition and revolt; all are representatives of what is best in human pride, of that need, which is too rare in the modern generation, to combat and destroy triviality. That is the source, in your dandy, of that haughty, patrician attitude, aggressive even in its coldness. Dandyism appears especially in those periods of transition when democracy has not yet become all-powerful, and when aristocracy is only partially weakened and discredited. In the confusion of such times, a certain number of men, disenchanted and leisured ‘outsiders’, but all of them richly endowed with native energy, may conceive the idea of establishing a new kind of aristocracy, all the more difficult to break down because established on the most precious, the most indestructible faculties, on the divine gifts that neither work nor money can give. Dandyism is the last flicker of heroism in decadent ages; and the sort of dandy discovered by the traveler in Northern America in no sense invalidates this idea; for there is no valid reason why we should not believe that the tribes we call savage are not the remnants of great civilizations of the past. Dandyism is a setting sun; like the declining star, it is magnificent, without heat and full of melancholy. But alas! the rising tide of democracy, which spreads everywhere and reduces everything to the same level, is daily carrying away these last champions of human pride, and submerging, in the waters of oblivion, the last traces of these remarkable myrmidons. Here in France, dandies are becoming rarer and rarer, whereas amongst our neighbors in England the state of society and the constitution (the true constitution, the one that is expressed in social habits) will, for a long time yet, leave room for the heirs of Sheridan, Brummell and Byron, always assuming that men worthy of them come forward.

What to the reader may have seemed a digression is not one in fact. The moral reflections and musings that arise from the drawings of an artist are in many cases the best interpretation that the critic can make of them; the notions they suggest are part of an underlying idea, and, by revealing them in turn, we may uncover the root idea itself. Need I say that when M.G. commits one of his dandies to paper, he always gives him his historical character, we might almost say his legendary character, were it not that we are dealing with our own day and with things that are generally held to be lighthearted? For here we surely have that ease of bearing, that sureness of manner, that simplicity in the habit of command, that way of wearing a frock-coat or controlling a horse, that calmness revealing strength in every circumstance, that convince us, when our eye does pick out one of those privileged beings, in whom the attractive and the formidable mingle so mysteriously: ‘There goes a rich man perhaps, but quite certainly an unemployed Hercules.’

The specific beauty of the dandy consists particularly in that cold exterior resulting from the unshakable determination to remain unmoved; one is reminded of a latent fire, whose existence is merely suspected, and which, if it wanted to, but it does not, could burst forth in all its brightness. All that is expressed to perfection in these illustrations. 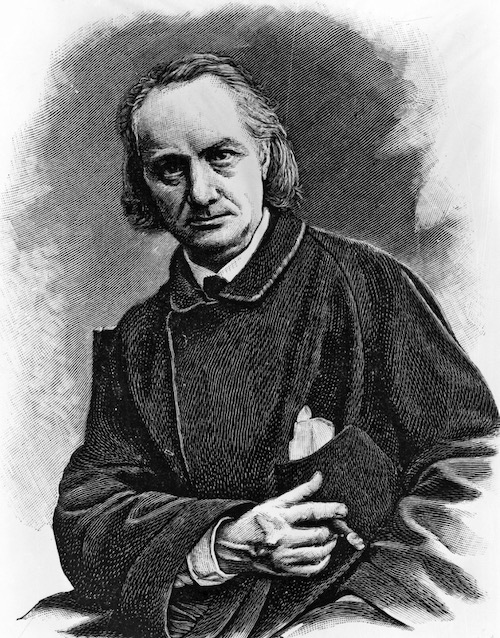