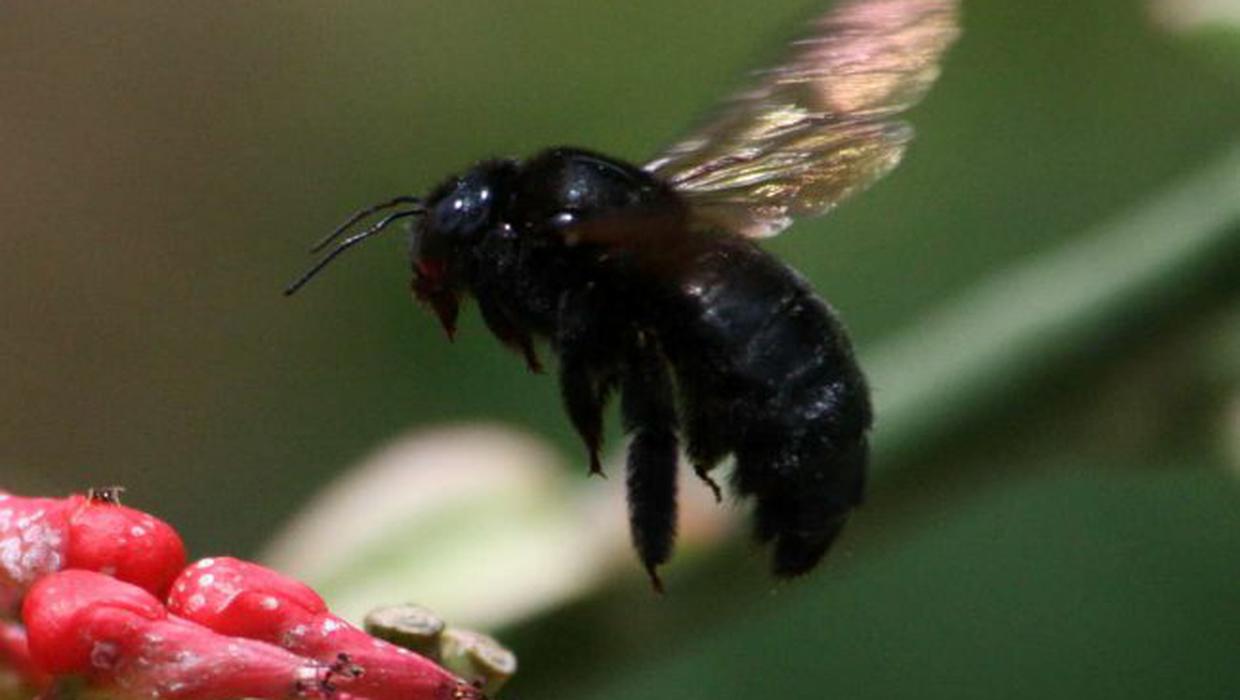 In addition to the many factors that are decimating bee colonies throughout the world, the dark bees, Western and Northern Europe's local bees, are confronted with demands of short-term profitability that favour importation of bees often more fragile and unsuitable for our territories. It is urgent we protect them.

A wonder of adaptation

Lively, frugal and resistant, dark bees have been present from the Pyrenees to Scandinavia for about a million years. Black-brown in colour, they are bigger and darker than other European subspecies, with a particularly large and voluminous abdomen. Their trunk is relatively short and their many silks (hairs) make them excellent collectors and spreaders of pollen, thus ensuring the survival of many wild plants and contributing to the yields and the quality of a large part of agricultural production.

The genus Apis comprises four groups of species, including Apis mellifera, or “honey-bearing bee”, that is found in Europe especially. It came from the East about a million years ago and has produced four main evolutionary lines. The dark bee, or Apis mellifera mellifera, is therefore a subspecies of one of these lines.

Particularly well adapted to the European climate, these local bees are more resistant to disease and its workers are known for their longevity. They are able to cope with extreme winter conditions by reducing the size of their colony and consuming their honey reserves sparingly, a regulatory process that increases their chances of survival.

Social bees, dark or otherwise, have an uncertain status, somewhere between domestic and wild. On one hand, they feed themselves, adapt to external conditions and do not need human protection. On the other hand, they are forced to live in a shelter built by a beekeeper, who becomes their owner and can now control their reproduction.

In the past, domesticated bees could become wild again during swarming, when the queen left the hive with half its inhabitants to start a new swarm, and inversely, they could revert to being domestic again by moving from a natural cavity to the hive. With the current deteriorated ecological conditions, there are fewer natural swarms and they no longer last as long as they used to. Most of all, beekeeping practices have evolved and now aim to reduce swarming by controlling reproduction, with grafting (transfer of larvae), artificial insemination or queen rearing. Bees have become an increasingly domesticated species.

Dark bees can be seen as both wild and domestic, although in view of the evolution of the species and their behaviour, they should be considered wild animals. Especially since they haven’t been the subject of intensive breeding like other varieties of bees modified by humans for increased productivity. This lack of official categorisation is a problem because only wild species can legally be recognized as a “threatened species”. However, dark bees are in fact a subspecies threatened in France for several reasons.

The story of a future extinction?

Over the past twenty years, bees have disappeared massively all over the world. In the most affected beehives, beekeepers record up to 90% losses (dead bees, those unable to produce honey or who never come back). This is called “bee colony collapse disorder”. In Europe, annual mortality rates between 2012 and 2014 were around 23% on average1, compared to 5% to 10% natural mortality. What is causing this? Several factors, and their combined effects: pesticides, neonicotinoids in particular, loss of biodiversity linked to intensive industrial agriculture, viruses, parasites such as varroa, fungi such as Nosema cerranae, Asian hornet, etc.

In addition to these factors that affect all pollinators, there are specific threats to the dark bees: a poor reputation and the massive importation of non-local swarms of bees.

The use of dark bees by beekeepers has significantly declined because they are perceived as being aggressive and producing little honey. It’s true that dark bees aren’t docile bees. To some, their ability to defend themselves and their responsiveness to stress, are even considered an advantage as it forces beekeepers to adopt practices that respect their nature. Scientists have demonstrated that actually it is mainly hybrid bees, resulting from crossbreeding between imported bees and dark bees, that are aggressive and difficult to handle. As for their supposedly low « yield », experts argue that their frugality largely compensate for this, as well as the low number of interventions required and their regularity, as dark foragers also work in bad weather and are more efficient during early and late blooms.

Due to their reputation as nervous and unproductive bees, and in the absence of a local market for dark bees, many professional beekeepers have resorted to importing subspecies with higher short-term yields: Italian bees (Apis mellifera ligustica), Caucasian bees (Apis mellifera caucasica), the Buckfast, a strain resulting from multiple cross-breedings made by a monk in the abbey of the same name.

From a genetic point of view, there are no European legal measures regulating these imports. Some countries, notably Italy, whose bees are the most widely used in the world for beekeeping, have no interest in such legislation.

Hybridisation, or crossbreeding resulting from these imports, however, are contributing to weakening local subspecies. Crossbred with bees that are less autonomous and adapted to the environment, these hybrid bees are weaker and require more care and maintenance. In the long run, these mixed bees may no longer have the initial characteristics of the imported bees (docility and yield), nor the resistance capacities that the dark bees have.

This subspecies has been here for a million years; it’s a genetic heritage that must be preserved and transmitted to future generations and all the actors in the agricultural sector.

Pollinators are not interchangeable: they do not live in the same environment or at the same time of the year and they forge different flowers depending on the length of their trunk. As they are more adapted to the local climate, dark bees are likely to ensure a more constant, regular and varied pollination than imported subspecies.

More resistant and longer-lasting, dark bees require less maintenance from beekeepers and provide a more regular honey production. They are suitable for sedentary beekeeping and can pollinate their environment and cultures all year round.

How to protect dark bees?